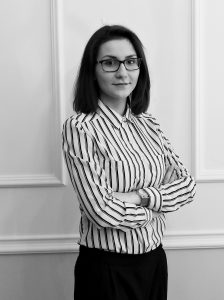 Magdalena Osińska is associated with Marta Derlatka PhD Law Firm since 2014. She graduated from Faculty of Law and Administration of Warsaw University in 2014. In 2015 she became a trainee attorney in Chamber of Attorneys-at-Law in Warsaw. Magdalena gained experience working pro bono in Academia Iuris Foundation and as a trainee in general courts of law.

Magdalena is especially interested in civil law (including cases on transmission service easement and vindication of receivables for housing communities and cooperatives), family law (especially divorce cases) and legal service provided for armed forces (including registration of statutory amendments and legal protection of trademarks).

Magdalena is fluent in English.